A neurological examination is part of your physiotherapist’s assessment and helps determine the correct diagnosis of your symptoms and the integrity of the nervous system. This should be tested if you are experiencing pins and needles, numbness, weakness, co-ordination issues or pain that radiates into your limbs that could be from your spine. The physiotherapist is looking for alterations in your sensory and motor systems, as well as your reflexes that could be due to the nerve pathways being impaired in their ability to send electrical impulses that co-ordinate these important functions. As your nerves leave your spinal cord, they travel throughout your body and provide many functions via electrical impulses, and this can be compromised with certain conditions such as if you have a disc bulge that is blocking the nerve on its pathway out of the spine. 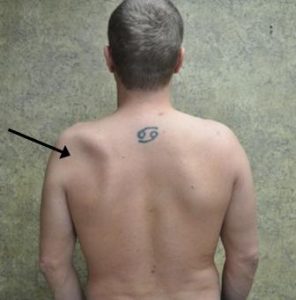 l consist of comparing muscles on either side of the body to ensure that the power is the same on either side and is normal, that there is no muscle wasting which could indicate that a nerve is no longer stimulating a muscle as is seen below. Your physiotherapist will work their way through a series of different muscles ensuring they have comprehensively tested all levels of the spine that provide motor stimulus to the upper or lower limbs.

We will also follow the sensory distributions of each level of spinal cord for the sensory component of the examination, which will involve as a general screen a light touch on the same area on both limbs comparing how strongly you feel the touch side to side. An indication of a nerve pathway being affected would be that you don’t feel the pressure is the same on each side or the area is numb. If this is the case, the physiotherapist can look at other tests to see how affected the nerve is by testing your ability to determine the difference between a firmer touch, a sharp versus a blunt object, or between a hot and cold object in the specific area that was altered.

The third component to the neurological assessment is testing your reflexes which is commonly done at the knee, ankle, elbow and wrist. The stretch reflex (also called the myotatic reflex or deep tendon reflex) is a pre-programmed response by the body to a stretch stimulus to the tendon or muscle. This reflex is designed as a protective mechanism for your muscles so that in response to a stretch, impulses are sent to the spinal cord resulting in a muscle contraction which prevents the muscle from being stretched too forcefully or beyond a normal range. Often people have experienced the knee-jerk test where a tendon hammer is tapped onto the patellar tendon resulting (in a normal response) in a quick mild contraction of the quadriceps muscles, which gives you a kicking motion. If the reflex is absent, or reduced on one side compared to the other, this could indicate a problem in the integrity of the nervous system.